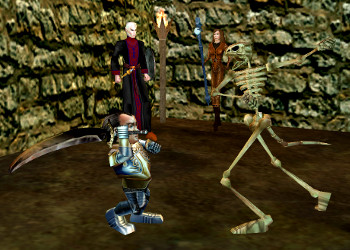 A Warrior goes toe-to-toe with an imperial lobotomist while his less durable groupmates cast spells from a safe distance.

The Warrior is one of three Tank classes in Shards of Dalaya, alongside the Paladin and Shadowknight. Of the three, the Warrior does the most damage, and has excellent Aggro, also taking the least amount of damage due. Warriors having a difficult time holding aggro should refer to the Warrior Aggro Weapons Guide.

The Warrior also has a slew of abilities unique to the class, foelock, which gives him much needed bonus hate against an enemy at the start of a fight, /shield which lets him boost an ally's chance to completely avoid incoming melee damage as well as single and multi target instant damage attacks. Warriors can also enter a bloodlust gaining a % of their damage dealt as healing. They can also spend their endurance giving various boosts to their raids and groups as well as making themselves even tougher to defeat.

The Warrior can be a tough solo class without good gear, and anyone making a Warrior should strongly consider making a boxed healer to be his partner. The duo will be capable of great things.

If you like being the most efficient heal target, like always being up in the enemies face, and enjoy having large group responsibility, then the Warrior may be for you.

The Warrior class receives 25 starting points to distribute in the various stats. The stats that directly impact the class are Strength, Stamina, Dexterity and Agility.

The hotkey for the combat abilities window is: Options->Keys->UI->Toggle Combat Ability Window

Discipline Abilities uses the warrior's stamina. Unlike other classes, a warrior does not regenerate stamina all of the time, but instead gains stamina through combat.

Warriors will begin combat at 20% stamina, 40% for Ogre race, until they receive their Melee Discipline AA in the Special tab that will give an additional 20%.