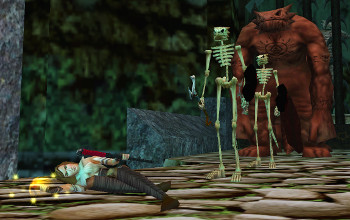 A Monk feigns death in order to strategically lure enemies to her comrades during a raid on Yclist.

The Monk is a highly evasive class, by providing high number of chain hits and highest avoidance out of any other class. However, Monks are not considered a tanking class out of the other three most well established Tank classes. This is because they lack the Mitigation needed for sustainable, more effective tanking. Monks are not to be highlighted as a Tank, and rely on their avoidance to carefully draw their opponent towards their party. As a Monk, you gain various skills that will be of use to you throughout your gaming experience. You will be able to use Mend, a skill that will heal exactly 25% of your HP once every five minutes, Sneak, a skill that allows you to walk unseen by KoS mobs if you are behind them as well as allowing you to sell to merchants and turn quest items into NPCs that otherwise would not take them(as the skill makes you indifferent to those NPCs) and Feign Death; a very helpful skill that makes mobs believe you have died and therefore allows you to survive. All monks also have an innate ability never to be stunned by rear attacks. An unarmed monk's ability to deal damage relies heavily on his strength and dexterity.

Monks of Dalaya have had their weight restriction (and corresponding innate avoidance bonus) removed.The SoD client will still display a loss of Armor Class as a Monk's weight increases above the previous limit of 13-20 pounds; this is hard-coded into the client but does not actually take effect.

The Monk class receives 20 starting points to distribute in the various stats. The stats that the game deems important to the class are Strength, Stamina, Agility, and Dexterity.

To use styles, type /style (or /s) and the corresponding number of the style. /style list will bring up the list of styles for your class. Monks must have 40% or more stamina to activate the additional for their strikes. Additional affects start at level 10 unless otherwise noted.

1. Hand to Hand damage has increased accuracy (without weapons in) scales with glove damage, str, and dex.

- “The STR/DEX scaling is not capped and scales pretty smoothly through the tiers. Currently, Monks reach approximately 1.0 ratio at 1000 combined stat (this includes buffs and is a rough estimate). The hardest numbers I can give you, since this is RATIO scaling, is that the highest maximum fist damage is 30 base and the lowest fist delay is 14 base. To hit 30/14 you would need an unthinkable amount of STR/DEX though but that is the limit I imposed for the ratio algorithm.” Slaariel 12/2/14 in the 'We All Love Monk, Here' thread

- In addition it was mentioned by Slaariel either in OOC or the 'We All Love Monk, Here' thread that str/dex scaling does not start until above 100 of each stat, nor does he think it works before level 65.

- “Each +damage on gloves grants +0.05 ratio now (which is about the same as it was before).” Slaariel in the 'We All Love Monk, Here' thread

-Discipline increases while in combat and goes to 20% (40% with refuge tome) when out of combat.

-Empowered special attacks are only used when over 40% stamina. See styles for list of empowered effects

-Empowered attack damage can be increased with codex bonus as well as slightly with str/dex as well as the force of body tome. They cannot crit, are unresistable (the damage atleast) and do not benefit from damage focii.

3. After fighting the same mob for 30 seconds without switching targets the monk gets a 10% damage bonus.

- A Monk aux-tanking a mob raises the aux cap for that mob slightly.

- If armed, a Monk takes less damage from a mob it is aux-tanking.

- If armed, a Monk innately dodges more attacks from a mob it is aux-tanking