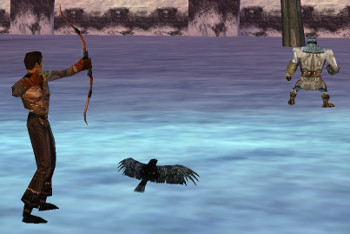 With his raven companion acting as a second set of eyes, a Ranger plans the perfect bowshot behind an unsuspecting orc forsworn.

Rangers are warriors attuned to the ways of nature, able to call upon the power of the wild to aid them in their fights. Rangers are primarily a melee class, able to wear chain armor and wield many kinds of weapons. Rangers are scouts and hunters, able to track enemies from a great distance and engage them with deadly ranged attacks, but rangers can also fight well in a melee, using two weapons to attack their foes. Rangers have spells drawn from nature. They can increase run speed and add to an ally's armor, health or ability to attack. In a pinch, they can heal or directly damage enemies with fiery attacks. Rangers can hunt alone or in a group, though allies allow them to best use their abilities. A ranger's bow is a welcome addition to a group, adding a good deal of damage. The ranger is a great class for players who like to engage in melee battles between trips to explore the broad expanse of Dalaya.

The Ranger class receives 20 starting points to distribute in the various stats. The stats that the game deems important to the class are Strength, Stamina, Agility, and Wisdom.

To use styles, type /style (or /s) and the corresponding number of the style. /style list will bring up the list of styles for your class.

Ranger alternate advancement title changes once you spend a certain amount of points in a field.

When kiting it is recommended to have Spirit Of Wolf cast on you or using potions.