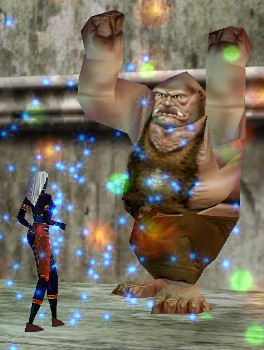 Hayl, Oggok's notoriously dense Shaman augur, bestows buffs upon a customer in preparation for an adventure.

The Shaman is the undisputed King of buffs and debuffs. While others, notably the Enchanter come close, no one changes the statistics of everything around them as well as a Shaman. The Shaman is also an apt spot healer, with the best mana endurance available; A shaman will be the last person to run out of mana due to his powerful Cannibalize line of spells, which turn their health into mana on a whim. In addition possess a solid Pet, and the second best DoTs in the game, making them a very formidable damage addition to any force. You would be very foolish to underestimate what a good Shaman brings to the table.

The Shaman class receives 30 starting points to distribute in the various stats. The stats that the game deems important to the class are Stamina, Wisdom, and Charisma.

All Shaman races start a bit low in the Charisma, and Shaman receive a number of spells that simply must land when cast early in the fight. Charisma is highly suggested for receiving the lion's share of your 30 points. Charisma is a moderately hard stat to raise through items.

Many of those spells not only must be cast early in the fight, but have a high aggro component. For this reason, a Shaman is much more likely than most other casters to find themselves the object of the mob's attention in a group. Distribute the remaining points into Stamina to give yourself as many HP as possible. Extra hit points can be converted to mana after level 24 by nature of the Cannibalize spell line. This source of mana regeneration is the second reason to have as much Stamina as possible. Stamina is very difficult to raise through items without making sacrifices elsewhere.

Wisdom is the mana pool stat for Shaman, and most believe this is the most important stat. This is a misconception that plagues many. It is suggested to place none of your starting points in Wisdom. Meditation returns a percentage of your mana pool each tick rather than a fixed amount. As such, a larger pool size can make meditation more efficient in regards to mana return, especially if you choose to solo. However, the reasons for having more CHA and STA have not changed, and the use of Cannibalize is still often needed when grouping. WIS is easy to max with items.

Shaman alternate advancement title changes once you spend a certain amount of points in a field.

Shaman possess two primary methods of killing mobs without assistance. For both methods a Shaman should always begin combat by debuffing their opponent. A resist debuff followed by a slow is often crucial to survival. From here, the tactics depend upon whether the mob can be rooted. If so, most Shaman will employ "root rotting", where they root their opponent and use their DoT spells to gradually eliminate it. This method does have it's perils in that Shaman DoTs have a Direct Damage component that can break root, so the Shaman should try to maintain some distance and slow their opponent to give themselves the best chance to reapply root should this spell break early. Shaman pets should generally not be used for these fights, since they will often break root and generally do not have the HPs to tank.

For opponents that are able to summon, a Shaman will usually find themselves tanking "in the face", similar to plate tanks. Debuffing is even more crucial for these fights, since a resist or an interrupt can mean the difference between life and death. Resist debuffs and slows are essential to survival against all but trival opponents. As with "root rotting", the Shaman will depend upon their DoTs for most of their damage output in these fights, but they can also call upon their pet as an additional source of damage.

Other methods such as pet tanking and kiting can sometimes be employed, but these methods of soloing frequently do not work for a Shaman. Shaman pets do not have the HPs to tank most non-trivial mobs, so they make poor tanks. The lack of a snare ability makes kiting impractical for most Shaman, though it is sometimes possible.