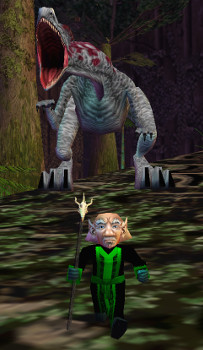 A Brood of Talin pursues his former master upon breaking the Enchanter's Control spell.

Being masters of manipulation, Enchanters shine in challenging situations where they can make full use of their control abilities. The enchanter's strength lies in his spells. Through casting them, he is capable of tricking enemies into fighting on his side, putting them to sleep, stunning them, summoning a floating sword-and-shield pet, and casting direct damage and damage over time spells. The enchanters ability to augment their party and cripple their enemies should not be understated. Two of the prized spell lines for Enchanters are their ability to greatly enhance the rate at which mana refreshes for their party and the break neck speed boosts an enchanter can bestow on fighters.

Finally, in raid and big group exp situations Enchanters spend most of their time trying to add DPS through some combination of pet damage (including charm) and the use of two specialty spells, Spell: Somatic Bond and Spell: Runic: Avatar of Destruction, which allow the enchanter to "piggyback" on the damage output of their most powerful groupmates.

Charm is not as strong as you might have seen on live and other servers. Charmed pets have a max of 50% haste. There is also a stiff assistance penalty for killing a mob that starts out as low HP. This would include killing a mob that was once your pet, you cannot break your pet that is low HP and get full experience for killing it.

The Enchanter class receives 30 starting points to distribute in the various stats. The stats that the game deems important to the class are Intelligence and Charisma. Intelligence determines the total mana you can hold, and Charisma is used for charming as well as determining a mobs resistance to your spells. The effect of higher Charisma is noticeable, even in the early levels.

A Dark Elf enchanter casts an illusion spell to lend himself the temporary appearance of a High Elf. This capacity for "shapeshifting" is one of the enchanter's defining traits.