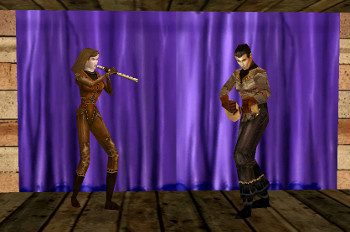 A pair of Bards take to the stage in their Newport guildhall.

Bards are 60% of every class. They can do just about everything at a reduced level in comparsion to the parent class of the ability, such as (but not limited to) Mesmerize, Enduring Breath, Levitate, Haste, Clarity, Invisibility, Snare, Direct Damage, Damage over Time, Direct Damage Area of Effects and plenty of others. They are the kings of movement, with thier Selo's line of spells (Bringing them to the Cap of Movement Speed), as well as the kings of stackable buffs. Thier songs stack with near everything else in the game, such as Damage Enhancement Focus Effects, to the Breeze / Regeneration line of spells with thier group Regens.

One thing to note about the Melody System on Shards of Dalaya, is that a Bard can have two positive songs and two negative song going at once. There is no twisting of the positive songs, but the two negetive songs must be twisted as only one negative song will sustain without twisting. Also note that certain bard songs act like spells and are neither positive nor negative and act differently than all other bard songs (examples include: charm, mez, certain run speeds). Songs are started just as a normal cast is started. Songs can only be stopped by stopping all songs using #endsong or by removing the song from your lineup (right click the songs icon in the spell/song bar). Alternatively, you can rotate songs being sung. If you have two beneficial songs being played and you start singing a third different song, that third song replaces the first song of the two beneficial songs currently being sung. Beneficial songs being sung activate each tick without needing to stop/start the songs.

Bard songs are not modified by focus effects. They benefit from instrument modifiers instead. Elemental damage on gear adds to bard songs, with a 1/3 reduction for DoT songs. E.g., +15 magic damage will add 15 damage to all songs in the bellows line, but only 5 damage to the relic magic DoT. Overcap spell skill modifiers also affect bard song damage.

Whether or not instrument modifiers apply is on a by-Effect basis rather than a by-Song basis; a Song can have a mix of modifiable and unmodifiable Effects.

Decidedly not in there: Mana regen, Attack Speed [haste, slow]

There isn't any differentiation between buffs and debuffs for things like AC and Resist Magic.

There are no diminishing returns. A 2.5 modifier multiplies by 2.5 wherever valid.

The bard class receives 25 starting points to distribute in the various stats. The stats that the game deems important to the class are Strength, Dexterity, and Charisma. In Shards of Dalaya, the most useful Bard stats are Stamina, Dexterity, and Charisma. These affect your HP, ability to play Songs, and the effectiveness of your songs vs resistances. Charisma is the hardest of the three to max with gear, so putting points into it during creation is highly suggested. The most useful Bard stat for low level Bards is Dexterity. Bard mana is intelligence based though Bards do not get any songs that use mana until level 25.

To use styles, type /style (or /s) and the corresponding number of the style.