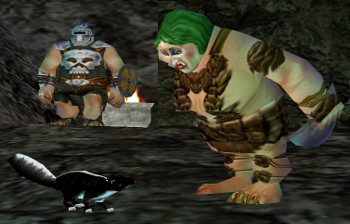 A young Beastlord and her new skunk companion size each other up before their first adventure together.

The Beastlord is a hybrid class that mixes elements of the Monk and the Shaman. The result is a melee fighter with some healing ability, ample buffs, and an ever-faithful animal companion known as a warder who will fight tirelessly at the Beastlord's side. This class is as well-suited to soloing as it is to grouping. In the latter case, the role of the Beastlord is twofold; he or she is capable of providing both DPS and utility support.

Upon attaining the first round of spells (Level 9), a Beastlord will be called upon by his or her hometown guildmaster to form a bond with one of three local animals. This bond is intended to be everlasting and can only be undone once through great effort; therefore, the fledgling Beastlord would be well-advised to weigh his or her options carefully. Each race's animal options are as follows:

Note: There are no gameplay advantages, statistical or otherwise, that go along with choosing one warder over another. Although a guildmaster's dialogue may suggest there to be some variance among them, the Beastlord's choice in this matter is purely for roleplaying and aesthetic purposes. Do note, however, that some warders take up more space than others; the Beastlord's Tiny Companion and Shrink spells can compensate for this.

The Beastlord class receives 20 stat points to distribute at character creation. Important stats to the class are Stamina, Agility, Wisdom, and Charisma. Suggested placement, 20Cha, Charisma is important for spells not being resisted and all Beastlord races have very bad starting Charisma. CHA is also less common on hybrid gear than other needed stats.

Bug!
Sneak appears to be trainable at level 1 when you train at your guild, but it is NOT trainable by Beastlords! However, if you do train the skill, the points are not wasted, but will be returned to you after you zone or relog-in.

To use styles, type /style (or /s) and the corresponding number of the style. /style list will bring up the list of styles for your class.

Getting the Most Out of Your Beastlord

Beastlords are (currently) the only class who has the ability to easily upgrade their power via a quest. Once you are capable of summoning a warder, you can complete the Advanced Beast Magic quest to build the bond between your warder and yourself. This enables a number of abilities, including /s 8 and /s 9 above, as well as allowing your warder to enter a blood frenzy. As your warder sees your current enemy losing in battle, their attacks become even more savage, causing increased damage until the foe is dispatched. The beastlord also shares a percentage of this increase. This ability strengthens as the beastlord gains in levels.